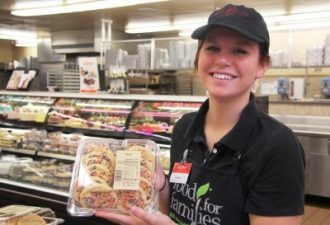 Sarah Barbusca had been working the till at Foster’s Freeze for two years and trying, unsuccessfully, to find better employment when she heard about Unity Care’s Jobs Program, a partnership with iFoster and Raley’s stores, that helps put foster youth into careers with a possible future.

“(The program) really pushed me to get a new job,” Barbusca said. “I had been talking about leaving for a long time.”

The pilot program ensures that foster and former-foster youth have resources needed for employment such as secure housing, reliable transportation, a working cell phone and emotional support.

Most helpful for Barbusca – who said she tends to be nervous and awkward – was learning how to fill out an application and answer interview questions.

“In a biological family, children learn life skills such as discipline, responsibility (and) job skills,” said Shane Libby, Placer County Programs Manager for Unity Care. “When they go into the system of care, they’ve been removed from their family because it wasn’t a safe environment, so in all likelihood there was no support there.”

The trauma of being removed from family and changing foster homes and schools as many as 20 times sets foster youth back in job skills as well, she said.

Nearly 50 percent of all foster children in the U.S. are unemployed by the age of 21, according to iFoster. Another 50 percent become homeless and as many as 25 percent are eventually incarcerated.

There were nearly 100 foster youth between the ages of 16 and 20 in Placer County in July of 2015, Libby said, though that number fluctuates.

“One significant barrier foster youth have is not having safe connections to fall back on,” she said. “Most of us have our parents . . .  even at the age of 40. If you don’t have that, you’re really left alone.”

Sometimes foster youth just need someone to talk to, she said.

That’s one reason the Jobs Program, which was modeled after a similar program in Maine, also works with employers to help them understand the unique circumstances of foster youth.

“We are educating managers and providing background about what it means to be in the system of care and what it’s like, so they can understand  . . . and be more supportive,” Libby said.

The 15-week pilot workshop was offered to anyone between the ages of 18 and 24 who had been in foster care after the age of 16, Libby said. Seven of Auburn’s foster youth participated, and all of the participants have found jobs throughout Raley’s stores in the area.

“We always have a need for applicants, and these young adults are worth taking a chance on,” Raley’s Senior Vice President of Human Resources, Mark Foley, wrote in a press release. “We have hiring managers asking to be involved.”

A new hire without experience usually starts as a courtesy clerk in Raley’s stores – which include Bel Air and Nob Hill – earning $9.50 per hour, Libby said, although Barbusca was able to start in the bakery because she had prior experience.

All employees are eligible to apply for higher-paying positions, including management positions, as they arise, and Raley’s prefers to hire from within, according to Libby.

A grocery store manager in the U.S. earns a median income of about $80,000 per year, according to the Bureau of Labor Statistics.

As for Barbusca, she’s not sure what she plans to do with her future, but she thinks she may like to work with animals.