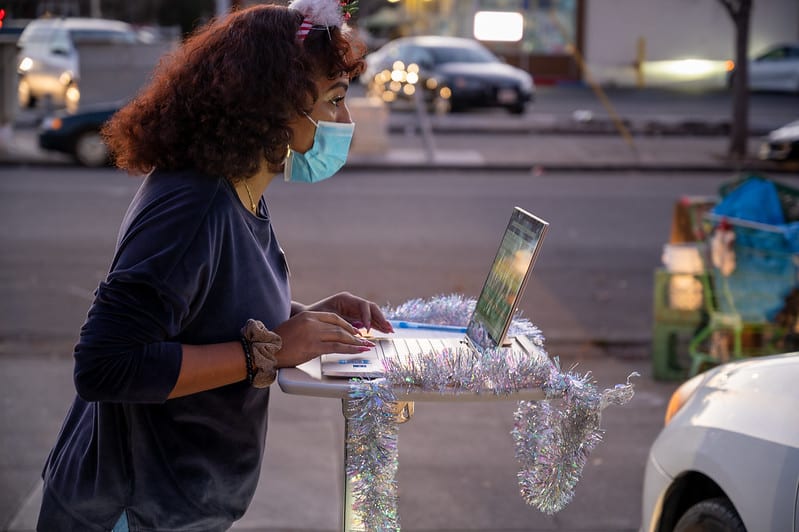 At the beginning of the COVID-19 pandemic, something about the crisis felt familiar to André Chapman.

Chapman, the CEO and founder of the San Jose nonprofit Unity Care, saw widespread misunderstanding of the disease, similar to that of the HIV/AIDS pandemic in the 1980s. While AIDS fell out of mainstream news, it continued to wreak havoc among Black Americans for years — with little attention.

According to the Centers for Disease Control and Prevention, more than 40% of people infected with HIV in the United States today are African American, despite making up only 12.7% of the country’s population.

Chapman said he is concerned about similar patterns with COVID-19.

Today, more that 25% of COVID-19 deaths have been among Black Americans, according to the Centers for Disease Control and Prevention. The agency says the disproportionate impact is the result of a variety of social factors based in discrimination across health care, housing, income, education, employment and more.

That’s why Chapman and Black organizations across the Bay Area have joined forces to create COVID-19 Black, a project that aims to help educate and protect African Americans through the pandemic.

“We’re struggling with how to deliver a crisis message to a community that already doesn’t trust its government, and not because any fault of their own but because of how the system has oppressed their communities,” Chapman said.

As a result, the mantle of education and protection has been taken up by community leaders and organizations.

AASCA has deployed student employees to share information about the disease, including how to isolate and quarantine, and distribute personal protective equipment. COVID-19 Black also has created flyers with safety information for churches with largely Black congregations.

Walter Wilson, CEO of the Silicon Valley Minority Business Consortium, said a key factor is to keep the effort within the local community.

For example, when the county first started hiring contact tracers, they weren’t from the communities they were working with.

“How do you think someone who has no contact, no relationships there, they’re going to come into these communities and ask ‘Who have you been with?’” Wilson said. After he and others raised concerns, county officials began hiring contact tracers locally.

Chapman said it’s important for Black people to “hear messages and narratives of the Black experience, that (aren’t) co-opted or misrepresented by corporate media but actually coming from the authenticity of our voices.”

Having an organization like COVID-19 Black in place, Chapman said, is important because after this pandemic, some other health crisis is likely to strike communities of color.

“A saying in the Black community is that ‘When white folks get the cold, Black folks get the flu,’” Chapman said. “We always get hit the hardest which is what we’re seeing right now.”

Wilson said even some Black health care workers are waiting to take the vaccine. “There’s natural distrust of the system that they work in,” Wilson said.

The distrust stems from experiences such as the Tuskegee Syphilis Experiments, which violated the rights of hundreds of African American men, or the case of Henrietta Lacks, whose cells continue to be used for medical experiments despite doctors never obtaining permission from Lacks to use them.

And Dr. Susan Moore, a 52-year-old Black woman from Indianapolis, who earlier this month died after receiving inadequate treatment for her case of COVID-19. In a widely circulated video posted on Facebook, Moore said she would have received respect and better treatment if she were white.

Balinton said that during a recent holiday food and supply drive-thru by AACSA, the vast majority of Black families he spoke to were skeptical of the vaccine.

“I can sympathize with that and understand the fear,” Balinton said, adding he is not advocating for or against the vaccine but asking people to keep wearing masks, washing their hands and socially distancing.

“As a leader, I am asking them to trust me about the very basics right now,” Balinton said.

“In the end we’re trying to protect a community so what stands between the community and government are the agencies that are doing the work on the ground,” Chapman said.

Governments need let the community on the ground continue to do the work, Chapman said,  because groups such as Unity Care, AACSA and the Minority Business Consortium have worked to build trust from the ground up.

Read this story by sanjosespotlight.com